In 2004, my good friend Scott convinced myself, Dan, and Derek to take part in the vertical marathon, a yearly charity event wherein they somehow convince people to pay for the privilege of climbing up the stairwell of the Banyan Tree Hotel, a 64-storey hotel on Silom Road.

I joke, but it’s actually for a good cause, and an interesting challenge to one’s physical fitness; most anyone can walk or run – some faster/further than others, of course – but climbing stairs ain’t easy. There’s a reason that doctors use a single flight of stairs as a fitness test for victims of heart attacks.

So, a few months ago I got a call from Scott again, asking if I’d be interested in another go. Despite a gap of 14 years (and probably close to 14 kilograms), I thought it would be fun to do again, and again for a good cause, this time the Thai Red Cross HIV Formula Feeding Fund. I paid the 400 baht registration and promptly forgot all about it until a few days ago.

Despite spending two nights in the hospital last week, I found myself at the Banyan Tree Hotel at 7am Saturday morning. 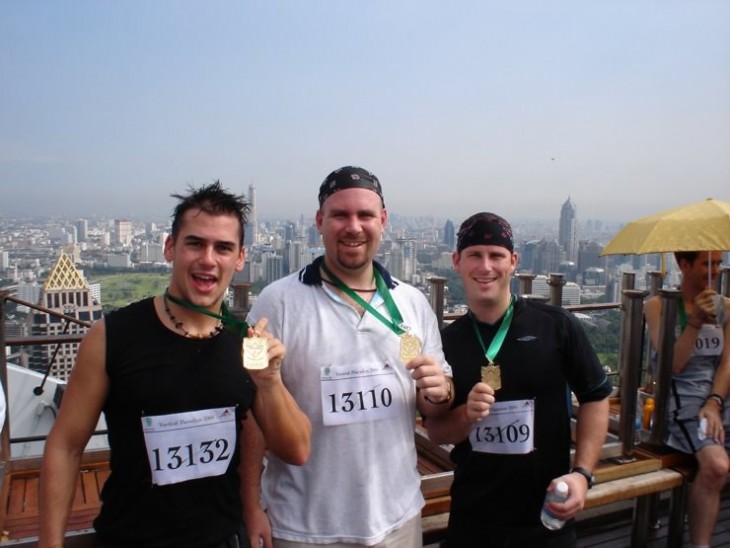 The Banyan Tree is a tall, skinny building, most notable for Vertigo, one of the OG swanky rooftop bars in Bangkok, which provides a great view down the axis of Rama IV road, and further down toward the river along Silom.

I didn’t do a count, but I’d say there were around 300 people there? 350? A lot, and let me tell you, a great majority of them were younger, fitter, and much better looking than I was. Thankfully, most of those young, fit, pretties belonged in the 18-35 category, so at least I had the excuse of belonging in the 36-49 age bracket. It’s not much, but I ran with it. 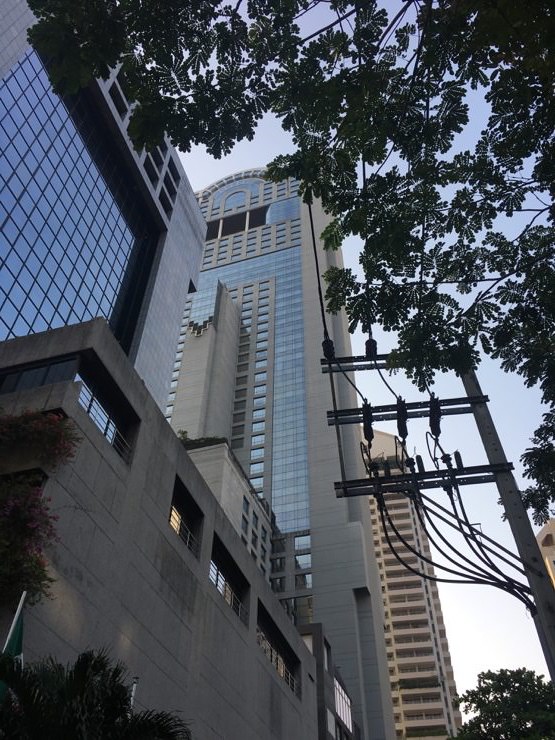 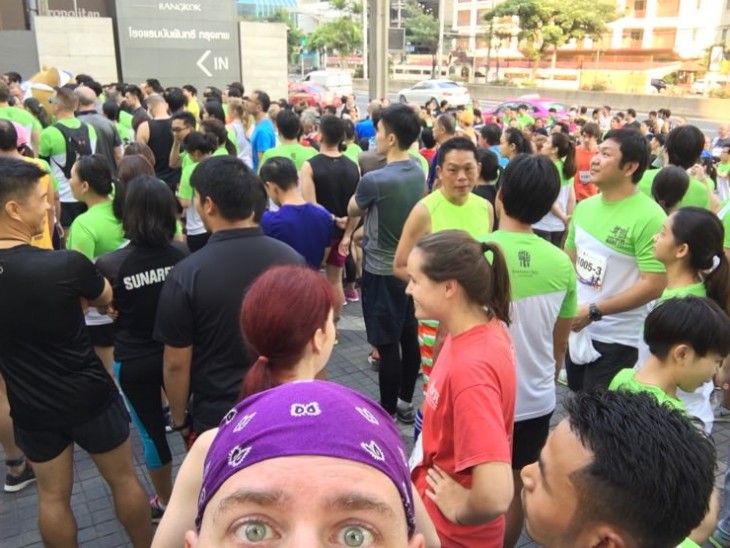 They lined us up 10 at a time and off we went, jogging to the base of the building about 100m away and then – into the stairwell for the climb up.

I made a mistake 14 years ago, which was to vastly overestimate my stamina. Back then I started off taking 2 steps at a time, but by the time I reached the 20th floor, I was a mess.

This time I took a cue from Scott – one step at a time, slow and steady. 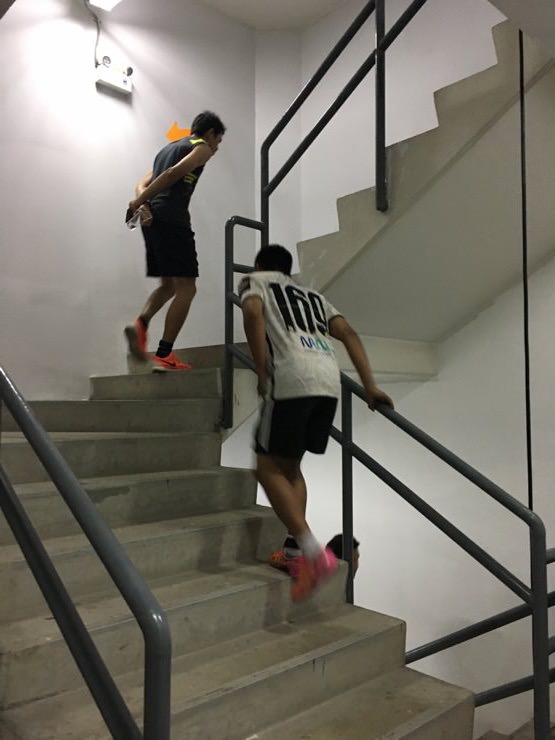 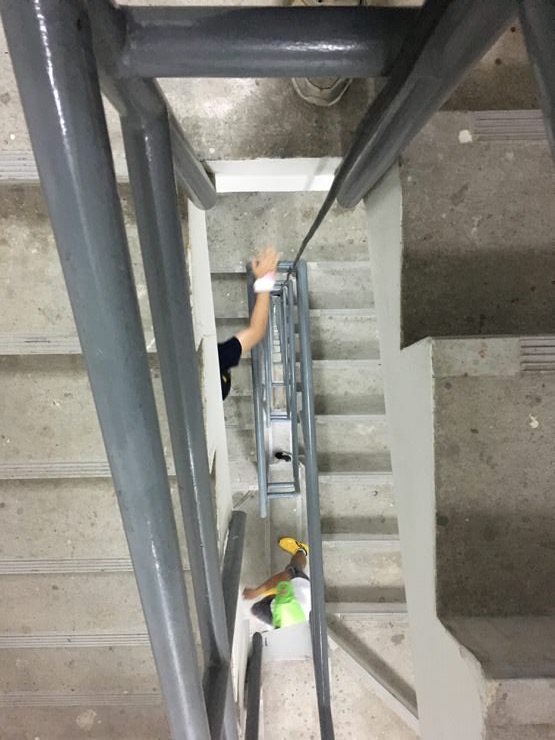 At this point, it wasn’t a race – I was just trying to finish. 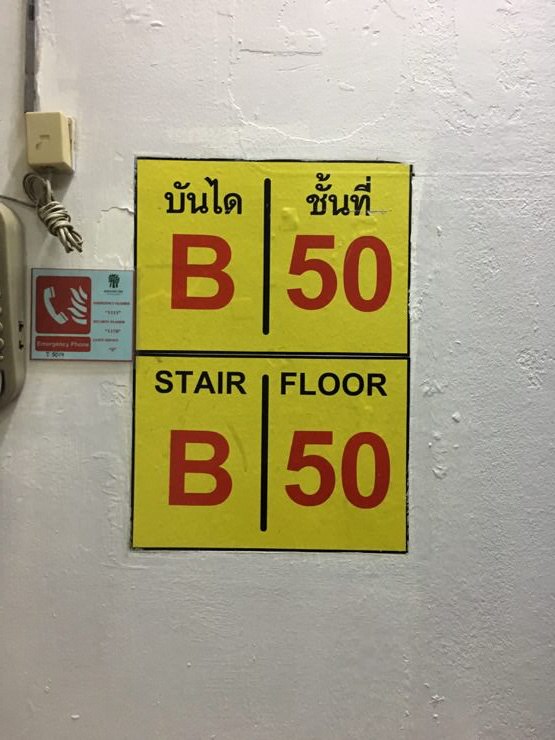 And then finally, I saw sunlight. I rounded the corner, went up a ramp, up another final set of stairs, and then crossed the finish line. Scott high-fived me as I passed him – he had made it up in around 12 minutes, clearly in much better shape than me.

But no matter – I finished! Sweaty, woozy, and very out of breath, but I still made it.

Guess it’s time to get back on that treadmill. Thanks Bangkok, for still providing some pretty neat events to take part in.

At least the view from the top was a good one. 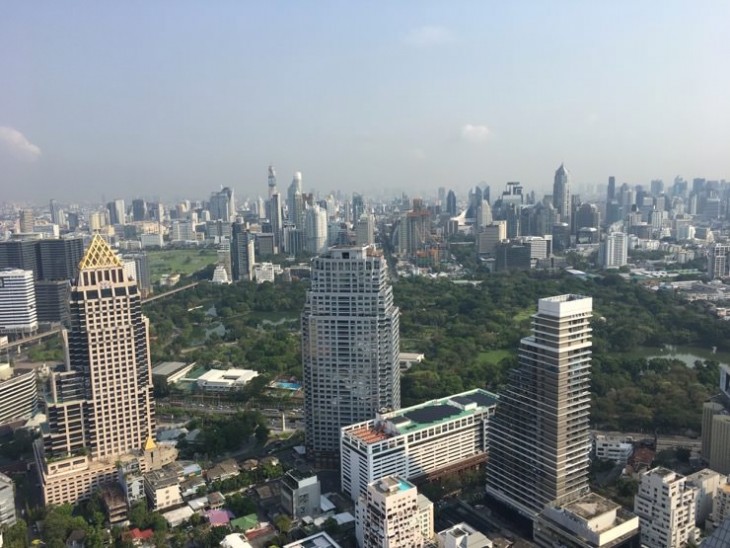