Taken for a Ride – A Thailand Scam Story

This is a story I wrote for the Toronto Star in 2006, reprinted here as a supplemental to an episode of The Bangkok Podcast on tourist scams.

“Why are you being so stupid?” shouted ‘The Godfather’ through uneven brown teeth as he jabbed a gaudily-jeweled finger toward me. I sat across the rickety table from him, as a bead of sweat marched its way down my temple, sticky from the tropical heat. How did I wind up here?

Despite every Thai tourist guide saying never to trust anyone offering you free rides or cheap gems, fifteen thousand people per year – forty per day – spend between $50 and $100 million dollars (US) on low-quality stones with the intention of selling them in their home country at huge profits. However, most discover that their ‘precious gems’ are worth little more than the postage it would take to send them back to Thailand. Technically, it’s legal – as one tourist policeman told me, there’s no law against jacking up the price. But it’s the smoke and mirrors interactive narrative that pulls you in.

To find out what’s so convincing about these well-publicized scams, a friend and I set out to be led down the garden path. With Thai skills on mute and our map upside down, we headed out to get swindled. 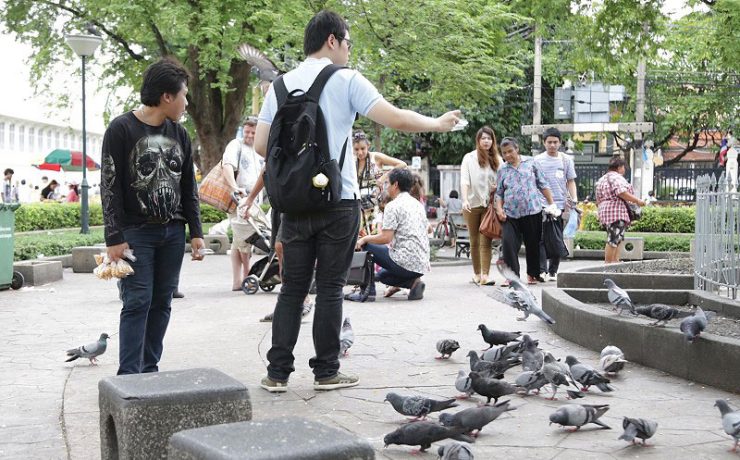 This isn’t going to end well for pigeon guy.

“The reason why so many people buy gems is because they see dollar signs. The vendors are selling hope,” says Adrian, a Canadian who fell prey to the scam to the tune of 39,000B ($1,175US). “I wasn’t looking at it as money spent – they were selling it to me as an investment.”

We arrived at tourist-heavy Wat Saket and barely had time to wonder how long it would take to be approached before a friendly man stopped us. “Where are you going?” he cheerily asked. When we told him that we were heading to Wat Pho, he said “Oh, Wat Pho closed today!” He then told us that for only 20 Baht ($0.60US), we could get a tour of the city, visiting the places he pointed to on our map. We eagerly agreed and 5 minutes later, found ourselves in the back of a tuk-tuk, racing toward our first destination. It was so by-the-book that it nearly hurt.

As we weaved in and out of the slow moving traffic and constricted sois (alleys) packed with vendors selling everything from live turtles to bulk steel shavings, our driver, Pong, explained that if we visited a tailor shop after our first stop, he would get a ‘government promotion voucher’ that was worth 5L of free gas. “Just look, you no have to buy!” He smiled at us when we agreed and said “Okay! You help me, I help you!” Our little tuk-tuk belched blue smoke as we tore off town the narrow soi.

Five minutes later, we arrived at the “Lucky Buddha,” an ordinary, nearly deserted wat (temple) with a small Buddha image as its centerpiece. As we were looking at the golden statue, a well-dressed Thai man approached and started telling us about the hand-painted walls and the history of Thailand. He told us that he worked for UNICEF and when we told him that we had not yet had any clothes made for us, he was surprised and recommended CJ Collection, where he takes all of his UN associates to get kitted out. We thanked him and continued on our way.

Sure, guys with button-down shirts and ties always wait on street corners in 30ºC heat and offer travel tips for free. Wouldn’t you do the same in your home town?

“I didn’t think anything was unusual because it was so perfectly run,” says Kevin, who got taken for 30,000B ($905US). “After I realized I was scammed I felt terrible about what had happened and a bit freaked out knowing that I was probably being followed for a good part of the day.”

Back in the tuk-tuk, we weren’t at all surprised when the tailor shop we had promised Pong we would visit turned out to be – what else? – CJ Collection. We were shown some over-priced samples and although the salesman was very polite, we said thanks but no thanks and continued with the tour.

Pong next took us to a gem shop, telling us “You don’t have to buy, just look for 10 minutes.” The jewelry was, as expected, overpriced and completely average and once the woman showing us around realized that we weren’t going to be buying anything, she was quick to show us the door.

“Once I was scammed, the police said they’d see what they could do, but not to hope for anything,” says Adrian. The truth is that gem shops change names and locations so quickly that refunds rarely get paid out. “It was one of the worst days of my life. I didn’t sleep at all. I was happy to get back home where everyone was concerned about me.”

At the next temple, some beefy Thai men ushered us to a table at which the aforementioned Godfather sat, along with a greasy, chain-smoking Frenchman. Over a friendly chat, they explained to us that they own a restaurant in France, and several times a year come over to Thailand to buy cheap gems and sell them back home. Coincidentally, today was the last day of the once-a-year promotion – what luck! With that, they pulled out receipts showing their purchases, glared at us and waited for an answer. We said thanks but no thanks, which is when the Godfather yelled “Why don’t you buy any? You’re so stupid!”

When we exited the temple to meet our waiting driver we discovered, much to our amusement, that we’d been ditched! I guess once Pong realized that he wasn’t going to be making any money from us, he decided to cut his losses. A perfect ending.

“I’m over it, but it definitely jaded me,” says Kevin. “It will just take more experience and more traveling to realize not everyone is just out for a buck. I plan to travel back to Thailand when I chance to but I will keep my head up a little higher next time.”

Although there are much more elaborate scams than ours, it’s simply not true to say that every tuk-tuk driver will end up trying to scam you. But from the ease and speed with which we were duped, it’s clear that the gem scam is here to stay. The only way to avoid it is to be vigilant of your surroundings and knowledgeable about the places you visit. And for Heaven’s sake, avoid the Godfather at all costs.

My son posing at the Museum of Contemporary Art. T

Suan Pa Benjakitti Park is right in the middle of

Scenes from a bike ride. Saphan Taksin to Ko Kret.

Last lunch at Muslim Restaurant after it closes af